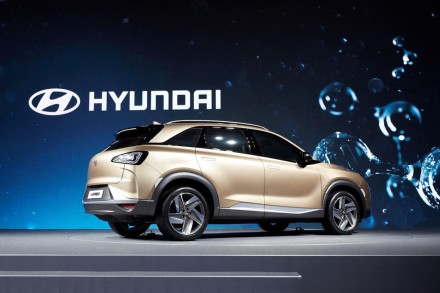 The Hyundai Tucson fuel cell crossover was introduced in 2014 as the first mass produced fuel cell electric vehicle in the U.S. Having driven over 3 million miles on California roads and highways it is estimated that instead of emitting over 1,140 tons of CO2 emissions they have emitted only clean water vapor.

The current Tucson Fuel Cell CUV has a number of advantages over some other alternative fuels. The energy-rich hydrogen fuel provides an estimated driving range of 265 miles between fill-ups, similar to many gasoline vehicles. The Tucson Fuel Cell can be refilled with hydrogen in less than five minutes, about the same time as a typical gasoline vehicle.  While it performs just as strongly as an internal combustion engine, its only emission is water. And it’s just as quiet as a standard electric vehicle while going farther on a single fuel fill-up versus a single electric full charge.