The future of vehicle production at Audi may be changing. Audi is looking into the principles of modular assembly.

Henry Ford’s idea of building cars in a rigid, sequential order is more than 100 years old and still the driving force behind mass production. Thoughts are the assembly line has served us well, but it’s outdated. Using stations instead of an assembly line, modular assembly is a more flexible way to build complex vehicles. 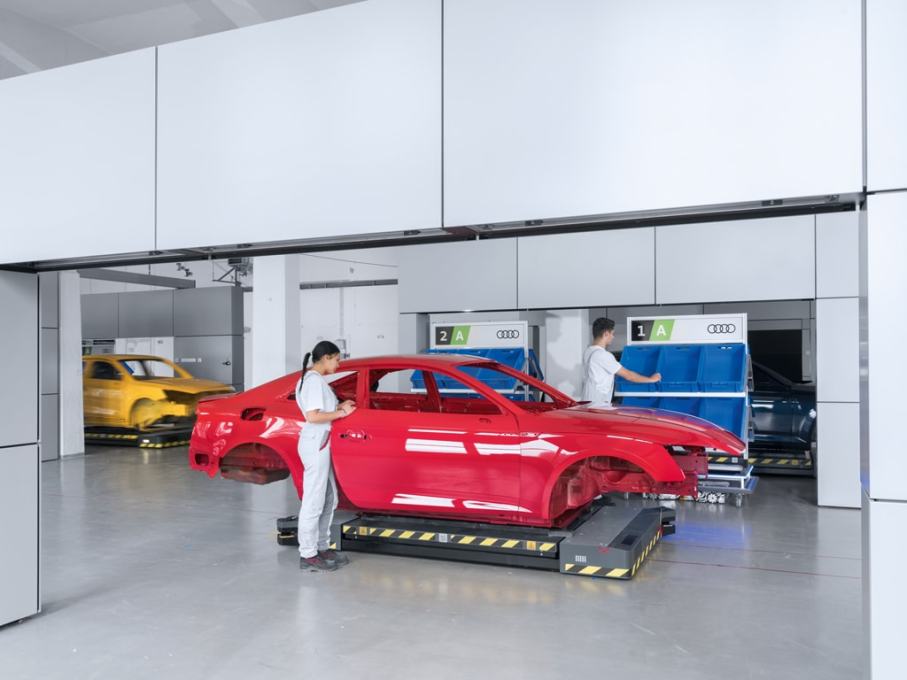 Recent years have seen immense growth in the demand for many different vehicle models. Some models require more complex components than others. This forces other models on a rigid assembly line to sit idle. Using stations instead of an assembly line allows all vehicles to move to the next station with no downtime.

A complete vehicle assembly setup might have around 200 stations. Each station may need only one or two people depending on the task. Unlike an assembly line each station would have its own time interval. It may be between one and four minutes. It would depend on the time it took to complete the operation, but not on the speed of the assembly line. An assembly line can only be as fast as the slowest operation.

If there is a delay at a station the next vehicle would just go to the next available station. The order of component installation is not always critical. If there was a delay or problem at one station it would not affect the rest of the “assembly line”.

While in high school I had a summer position at Pontiac Motor Division in Michigan. I was in the parts testing lab and a difficult to replace component was failing its quality control. The assembly line was stopped while the supplier flew in a new batch by jet helicopter. Hundreds of workers had a couple hour coffee break on me. Modular assembly would prevent this type of costly situation.

With Modular assembly vehicles and components would move to stations on a driverless transport system (DTS). There would be two fleets – one to handle transportation of the body shells between the stations, while the other delivers all the parts, from fasteners to the sliding roof.

A central computer would use a radio network to locate and control the DTS with centimeter precision. It is the mastermind of modular assembly. It knows the production status at all times and in every detail. It knows the build status of the individual cars, which stations need what parts when, and how they receive them. And its decision-making is highly flexible. For instance, if a certain DTS approaches a station that is still occupied by a vehicle, it is diverted to another, free station.

Replacing the assembly line with assembly stations can result in a 20% increase in productivity. As the number of different models increases and complexity of components the productivity number would increase.

Smart factories may be coming in the future – who knew.