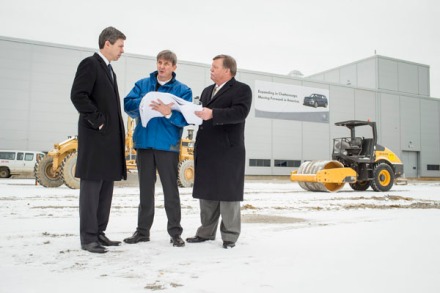 There are big new additions coming to Volkswagen, including an all new midsize SUV and a major expansion project at their Chattanooga manufacturing facility.

The plant in Chattanooga, Tennessee began production in 2011. For the last several years they’ve been building the all-new Passat sedan, which they’ll continue to produce while also making room for the newest member of the Volkswagen family.

To accommodate the additional production, 512,886 square feet will be added to the existing Chattanooga facility. Expansions will be made to the body shop, paint shop, and assembly areas. The plant will also be getting a new warehouse.

The National Engineering and Planning Center will temporarily move next store as Volkswagen seeks to hire over 200 engineers as part of the estimated 2,000 additional workers that will be hired to manufacture the new Volkswagen SUV. The newest Volkswagen is expected to start production in 2016.

Also expected in Chattanooga by the summer of 2016 is a Volkswagen Visitor Center for those of you who just can’t get enough of your favorite cars.